Buxton Dentist Responds to Dangers of Netflix Documentary “Root Cause”

Dr. Nicholas Roy of Saco River Dentistry shares his professional insight into the controversial film “Root Cause” that was released on Netflix in 2019 and later removed.

Buxton, ME — Root canals are an incredibly common dental procedure intended to save a tooth that has become severely decayed or infected. According to Buxton cosmetic dentist Nicholas K. Roy, DMD, MAGD, by removing the tooth’s inner nerve and pulp, then cleaning and sealing the tooth, patients can avoid a more invasive extraction procedure. While root canal therapy has been deemed safe and effective by the American Association of Endodontists, some people believe the procedure contributes to systemic disease. This was the emphasis of the 2019 Netflix documentary “Root Cause,” which claimed root canals lead to systemic problems. The documentary was removed 29 days after its release due to the lack of scientific evidence.

Soon after its release, “Root Cause” received significant backlash from dental and medical communities, as they insisted it spread misinformation about root canals negatively impacting the human body, such as by causing cancer. Describing himself as “a dentist and die-hard scientist of all things explained and unexplained,” Dr. Roy released a position paper, “The Root Cause – Dental Documentary on Netflix,” in which he provides an in-depth look at the truths and misleading information of the film.

In this detailed essay, Dr. Roy reminds viewers that documentaries “are an entertainment-first form of television that […] often use ‘emotional tactics’ as a method to increase their viewership.” He notes that their facts are not verified, and in the case of “Root Cause,” the scientific claims were based on highly flawed research presented by Dr. Weston A. Price in the 1920s, which have been repeatedly disproven over the decades. Dr. Roy acknowledges that it is human nature to want to find a clear culprit to a problem, such as by attributing systemic disease to root canals—but rare stories of someone being “cured” by tooth extractions cannot disprove years of scientific evidence saying otherwise. In Dr. Roy’s words: “The ‘scientific method’ has stood the test of time, and should not be removed in evaluation of any ‘theory,’ no matter how convincing otherwise.”

Although he recognizes the documentary takes a poorly supported stance against root canal therapy, Dr. Roy says it is not impossible to believe there could be a connection between root canal-treated teeth and one’s systemic health. He notes that 3D x-rays often reveal cavitations around root canal-treated teeth, caused by small amounts of bacteria that cannot always be completely removed—especially when the infected tooth has undergone complete necrosis. However, due to insufficient scientific data and evidence, he is not convinced this will cause cancer elsewhere in the body. That said, Dr. Roy advises for root-canaled teeth with a cavitation to be extracted, due to an increase of aggressive bacteria typically present in non-vital (dead) teeth, as detailed in the chart below. 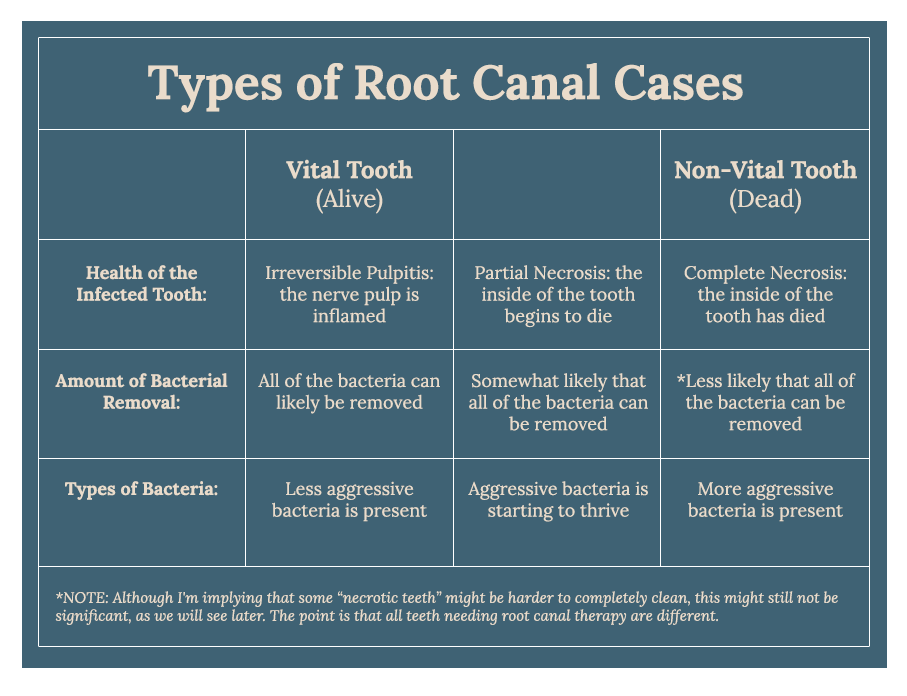 Dr. Roy concludes that if there is a connection between root-canaled teeth and overall body health, changing therapy will likely not cure cancer, as the Netflix documentary states. He says a potential connection is worth evaluating further, but having two root canal-treated teeth himself, he will not be having them removed. Dr. Roy elaborates, “My dental training left me with one very strong approach to scientific perspectives: ‘Only do something, if science has proven it to be effective.’”

He says that, ultimately, a patient and their dentist should weigh the unique risks of their case, by comparing root canal therapy against another treatment option like extraction. Every case has different factors to consider, explains Dr. Roy. He recommends people seek a qualified, evidence-based dentist who uses 3D x-ray technology to ensure they are fully informed about their health decisions.

Dr. Roy has practiced clinical dentistry for 11 years, performing comprehensive care in the form of cosmetic and restorative dental treatments, including porcelain veneers, dental implants, and full mouth reconstruction. After graduating from the University of Connecticut School of Dental Medicine, Dr. Roy trained in the Virginia Commonwealth University School of Dentistry Advanced Education in General Dentistry (AEGD) residency. He has over 1300 hours of continuing education, and is one of only 2% of US dentists who have achieved the elite status of Master of the Academy of General Dentistry (MAGD). Dr. Roy is also involved in several dental associations, including his role as Board Member and President Elect of the Maine Academy of General Dentistry. He is available for interview upon request.